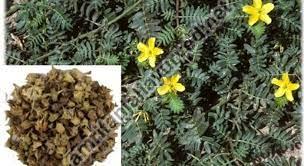 Gokshura is an herb and also it is a medicinal plant. It is used in preparation of medicines. It is one of the pure herb which is used in Ayurvedic medicines. The Gokshura is originated from the genus of Tribulus. Gokshura belong to Zygophyllaceae family. The Gokshura is scientifically named as Tribulus terrestris. These herbs are not only used in Ayurvedic medicines, but also in other Indian Medicines like Siddha, Unani and Kashmiri. In North America it is an invasive species. It is an herbaceous tap-rooted perennial plant. These are mainly found in Southern Europe, Australia, Africa, India, China, Vietnam and Southern Asia.

As this is mostly found in the subtropical parts so in India also these Gokshura is found in Punjab, Gujarat, Assam, Jammu and Kashmir, Himachal Pradesh, Rajasthan and Uttaranchal. This Gokshura herb is also named as Gokharu, Gokhru, Gokhru, Bahukantaka and Chirupalleru.